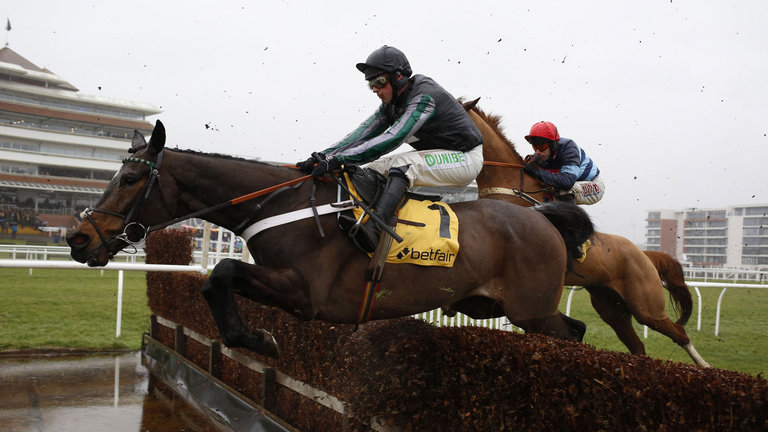 The days are getting shorter, the air is (gradually) getting colder, and department stores have started playing the same old Christmas hits over the loudspeakers on repeat – but it’s not all bad, because that means it’s time for the jumps racing season to begin in earnest. The most dedicated jumps followers may have had a flutter on some of the Summer action, but the top-class British horses will only start heading back to the racecourse over the coming weeks, starting at Chepstow. There’s a fascinating season of racing ahead, with champions looking to become all-time greats, and some of the most exciting young horses for many years seeking to dethrone them.

Perhaps the most eagerly anticipated clash may take place in the 2-mile chasing division. The undisputed king is Altior, who despite a season interrupted by injury, swept past the field using his unrivalled finishing speed to land the Champion Chase in breathtaking style. The pretender to the throne is Footpad, a horse whose pinpoint and fluid jumping technique has seen him progress from a good hurdler into a potentially great chaser: Footpad hammered the field in all five of his starts last term, including the ruthless demolition of a strong Arkle field. But with Altior trained by Nicky Henderson in the UK, and Footpad trained by Willie Mullins in Ireland, the much anticipated battle may not ultimately take place until the Champion Chase at Cheltenham. Even if that is the case, it promises to be worth waiting for.

Staying chasers always capture the imagination, but with the Jockey Club offering a £1 million bonus for winning the so-called ‘Triple Crown’, and the possible return of the high-class Thistlecrack and ex-champ Sizing John from injury, jumps fans are licking their lips in anticipation even more than usual. The winner of the epic 2018 Gold Cup, Native River, is an out-and-out stayer who relishes tough conditions, which makes him ideally suited to the first of the three legs of the triple crown, the Betfair Chase at Haydock. Yet Bristol de Mai is a proven course-specialist who has an exemplary record at the Lancashire venue, and he’ll be targeted at the race by Nigel Twiston-Davies. The next major clash will be the King George, ran on Boxing Day at Kempton, a track which generally rewards a high cruising speed and out-and-out class and as such is made for unlucky Gold Cup runner-up Might Bite. And there looks sure to be yet another major player to add to the mix in the Gold Cup itself, as impressive RSA Chase winner Presenting Percy has shown he simply loves the Cheltenham hill, with a 2/2 record at the Festival. If even most of these top horses stay fit, it could be an unforgettable season of chasing action.

The hurdling divisions also contain no lack of intrigue. Two-time Champion Hurdler Buveur d’Air is still only 7 and has every chance of retaining his crown, although he never truly convinced last season, only getting up by a neck to beat Melon at Prestbury Park. That could tempt Gordon Elliott into keeping the most exciting horse in training over hurdles this term. That horse is potential superstar Samcro, who lived up to his substantial hype when winning the Ballymore and Deloitte Novice Hurdles last season in fine style. This physically imposing specimen was bought to be a chaser, but can Gigginstown’s O’Leary brothers really resist a tilt at the Champion Hurdle? Even if Samcro does go chasing, Buveur d’Air is likely to face a serious challenge from other up-and-coming horses. Summerville Boy won a strong-looking Supreme Novices Hurdle in a quick time, but the Tom George-trained 6-year-old will need to improve his careless hurdling technique. Last year’s juveniles seemed a mixed bunch, looking to have ability but running inconsistently, until the aptly-named We Have A Dream delivered a dream performance at Aintree in April, which suggested a serious tilt at this year’s Champion Hurdle could be a reality.

Meanwhile in staying hurdles, all eyes will be on the great Faugheen, who stormed back to somewhere near his magnificent best with a 13 length defeat of two-time Stayers Hurdle champion Penhill at Punchestown in April. Was this a glorious one-off or can the 10-year-old roll back the years and dominate again?

And what of those hurdlers from last season who will now look to take on the bigger obstacles in novice chases? If Samcro does go chasing, he will prove hard to beat, but one horse who would relish a battle with him is also well-named, the reliable and battle-hardened Kalashnikov, narrow runner up in the Supreme Novices Hurdle and previously winner of a hard-fought Betfair Hurdle. Paul Nicholls, who has had a dearth of top-class horses recently, cannot hide his excitement with the “massive” Topofthegame, who “reminds him of Denman” – and there aren’t many bigger compliments than being compared to ‘The Tank’. Similarly, Tom George cannot understate how thrilled he is at the prospect of Black Op going chasing, and training genius Nicky Henderson loves Santini’s chances this coming season. With the amount of talent in this division, trainers will struggle to keep their prized horses apart before the Spring festivals, meaning it could be a year full of titanic novice chase battles.

However, even with all of these top clashes due to take place, the jewel in the crown of British jumps racing is still undoubtedly its fiercely competitive big-field handicaps, run throughout the season at even the smaller tracks. Punters will already be seeking clues from stable tours for likely runners in the Ladbroke Trophy at Newbury on 1st December, twice won by Denman and possibly the highest class handicap of the whole season. Of course, the biggest betting race of the year will be the Grand National, and ante-post wagers are already flying in, many on reigning champion Tiger Roll to repeat his victory or 2017 winner One For Arthur to re-gain the title.

Thankfully there’s an almost limitless amount of tremendous racing to watch before we reach Aintree in April. From now until then, every weekend will have at least one meeting of major quality, midweek races are becoming more and more punter-friendly too. So don’t make the mistake of waiting until Cheltenham in March – the action starts now. I’ll be keeping you up to date with all the developments through the season, with a round-up every two weeks, so bookmark this page, and see you back here soon.

Last year I wrote a few ‘colour’ pieces for Smarkets. Mostly these were specifically designed to give fresh or alternative angles to some of the big races and meets, rather than tips as such. The one time I did write a proper ‘tipping’ piece turned out okay, when I gave people 7 horses out of the 40 to bet on in the Grand National. Four of those seven were among the 12 finishers, with the 10/1 winner Tiger Roll and a 25/1 (40/1 in the morning!) place among them: Grand National 2018 Preview – Smarkets

In retrospect, you’d have done well to ignore the advice in my pieces on the Cheltenham, Aintree and Punchestown festivals when it came to placing wagers, but the research did uncover some intriguing statistics that may prove more profitable in 2019. And you can’t have too many ante-post angles to choose from…

Hello there, jumps fans, and welcome. I’m hoping you’ll enjoy my musings on all things National Hunt over the coming months, and with any luck we may find a winner or two along the way.